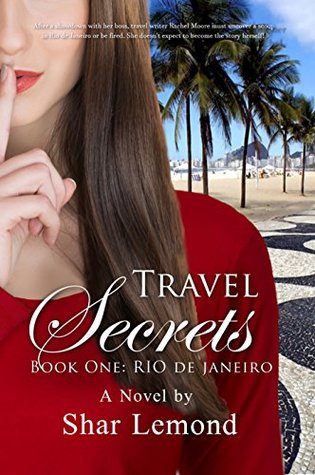 Happy New Year, everyone! I’m positively thrilled that Shar Lemond has shimmied over to my blog to share some time and be the first author interview of the year. Soon after reading her spunky novel, Travel Secrets: Book One- Rio de Janeiro, Shar and I became fast friends. How could we not? Besides being artsy, talented, intelligent, family-oriented, cultured, and driven, she’s down-to-earth and as genuine as they come. (Did I mention spicy?) One thing’s for sure, with Shar, you never run out of fun and interesting things to talk about and I’m sure you’ll find her just as amazing as I do.

Kristy: Good afternoon, Shar! Thanks for stopping by! Please tell readers a bit about yourself.

Shar: As the surname I’ve chosen for my pseudonym, Lemond, I am of this world. I’ve lived on four continents and have traveled and backpacked so much that I feel I’ve become a mixture of many cultures. The past few years my home has been in Houston. I don’t even feel like I’ve committed a grammar crime saying y’all!

Kristy: When you’re not jetting off to some dreamy destination, winning Texas Hold-em Tournaments, writing a five-star romantic travel adventure series, or homeschooling, what are some of your favorite hobbies? What’s your daily fun?

Shar: I can’t do any chores without listening to an audiobook. I love attending Zumba classes or walking my Jack Russell Terrier, Tony Stark, around my neighborhood lake. I like scrapbooking but hardly find the time to do it. Also, I’m a little addicted to sitcoms, especially older ones. When everyone was recently asking What’s your favorite Christmas movie, my answer was Christmas sitcom episodes: Miranda, Frasier, Seinfeld, etc.

Kristy: Congrats on your recent book signing events (great pics, btw). Do you have any advice for new authors on how to get prepared and calm those pre-event jitters?

Shar: I was so nervous that first time! I can assure novices by saying you pretty much just have to go through it and it would get easier. Try to plan what to say in advance, although the spiel you’ll end up giving people would probably end up forming itself as you go. Also, I’ve scheduled the signings with my good friend and fellow author who had also recently released her first novel. It was easier to be nervous together, to take turns addressing people, to learn from one another, and just to chat when no one was around.

Also, get a good pen and a card processor. Mine is a PayPal with a chip reader. Don’t forget to charge it for a day before the event. Also, use it at home once first to familiarize yourself with how it works. I even wrote down the steps. You can turn on the blue tooth on your phone and turn the device on as many times as you like, but if you don’t log in to the app, it won’t appear on your phone (which is something you might forget in your nervous state). But most important is to have fun and try to connect with your readers.

Kristy: Great advice! Travel Secrets: Book One- Rio de Janeiro was inspired by your personal travels, does that include Paris and Bordeaux? 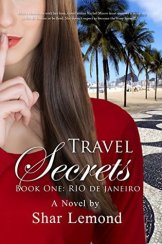 Shar: I traveled to Paris and to the south of France on my honeymoon many years ago. I wish I could have traveled there again recently, but that was impossible. However, I felt I had enough to draw on to write the second book and I’ve done significant research into France’s wine country. Plus, I’ve used my years of learning about wine, including taking a sommelier course at a fine-dining restaurant I’ve worked for, to write the book. I am positive most people would find the wine principles I’ve spoken about illuminating. Plus there’s a grape-stomping scene a-la I Love Lucy you simply can’t miss!

Kristy: Out of all of your travels, where was the most romantic? Which destination would you love to stay and write for 6 months? Where were you most inspired?

Shar: I have been wondering that myself. It’s hard to choose between Paris, Hawaii, or the Iguazú Falls in the south of Brazil. As much as I adored the latter, Paris would have to be the winner. The incredible art available at every turn and the myriad of treasures in the Louvre make it unbeatable. The beauty of the city itself is inspiring. And then there the sensual pleasure of French food. What better place to have a romantic meal than the top of the Eiffel Tower, the banks of the Seine, or one of their many beautiful parks?

Kristy: When can readers get their hands on the second book in your series? Do you have a final release date planned?

Shar: I hope to release book two by April of this year, mainly because it’s a good idea to give it at least three months before you release. It gives various websites the opportunity to promote it as an upcoming release. Also, I’m going to try and get some endorsements first, although those are not easy to come by. The truth is, I haven’t tried that hard with book one. After being ignored a few times, it’s hard to find the incentive to continue emailing people. But book two has at least one contentious issue that I hope will get people flocking to my page, even if it’s just to tell me off.

Kristy: Who designs your covers?

Shar: Dawn Grimes from DW Creations LLC did my cover. She is wonderful, and her price is unbeatable! And she is very patient. We went back and forth many times and she was fine with it. She’s a writer herself and she knows it’s a process. For instance, at some point I wanted to change the entire concept and make the cover in the colors of the country’s flag, meaning book one would have the colors of the Brazilian flag, boo two the colors of the French flag, and book three the colors of the American flag. But after a few weeks of stepping away from the current cover, I looked at it again and I knew it was simply perfect, so we dropped the whole flags idea. You should see the cover of book two! I’m doing a cover reveal soon and it’s simply gorgeous. Dawn also did the cover for my husband’s non-fiction history book, to be released very soon. She does Sci-Fi, fantasy, you name it.

Kristy: Who are your all-time favorite authors? Favorite books you could re-read over and over?

Shar: I love many of the classics. After a few centuries of reading the great Russian literature, I’ve decided I’m done getting depressed by it. I like to re-read the great American and British literature. I also love Victor Hugo and Ibsen. I love re-reading An Enchanted April every April. It captures the sense of spring and personal rebirth so perfectly, it brings me immense joy. I’ve also listened to Patrick Taylor’s Irish Country Doctor series a few times. Nora Roberts’ Born In trilogy is a delight I like to repeat too. Plus, I think I’ll listen to Jasper Fforde’s Thursday Next series again soon.

Shar: I am eager for readers to be able to read the entire Travel Secrets trilogy so they could see the wider themes illustrated in the books. Book one is where my protagonist, Rachel, finds herself, or to be more accurate, creates herself, but this resolve is tested in France, so Rachel is not done growing up. And there’s so much else going on I wish I could allude to, but I don’t want to give anything away. Other than that, I wish more people would open themselves to the possibility of being surprised by something new and falling in love with a new kind of book. Readers (and agents) are quick to demand a genre, a pace of action, a certain kind of mold a writer can fit into. And they all want a comp-title, in other words, a book they could compare yours to, so they would know in advance whether a book is worth their time. But as one wise fan of mine said, my book doesn’t fit neatly in any genre, nor can it really be compared to anything else. I hope it doesn’t sound haughty when I say Travel Secrets is an original stand-alone, a fact which will become even more evident once the trilogy is released. Read it and judge for yourself.

Kristy: Where can we find your books?

Until recently, I’ve been on Amazon, Goodreads, and BookBub only. But I just released on Draft2Digital, so they put me on iTunes, Barnes and Nobel website, Kobo, and more. I need to put the proper links on my site: http://www.sharlemond.com

Last movie you watched: The Scarlet Pimpernel and Avengers: Age of Ultron.

Top three fav bands of all time: Sorry, I can’t name any bands. Three favorite artists of all times are Ella and Louis, Charles Aznavour, and Edith Piaf. As a teen, I loved stand-alone artists, too, like Anne Clark and Kate Bush, but there was one band I liked, too. A punk band named Virgin Prunes.

Favorite season and why: Spring. After the dark, gloomy, cold winter, suddenly a little bud of a flower appears. And then a few more. Coats and heavy blankets are put away. The heat is turned off and the windows are allowed to open, bringing in a breath of fresh air that carries within it a sort of promise. Yes, definitely spring.

Three things you can’t live without: I can’t live without my husband. He allows me to not work for money and to focus on my writing and on homeschooling our son. He also cracks me up when I’m down. My dog Stark is another indispensable part of my life. Every member of the family stops to absorb some of his sweetness and warmth a few times a day. And my computer. I don’t think I can live without it.

Last book you read: Trustee from the Toolroom by Nevil Shute. Absolutely loved it!

Shar: Thank you so much for the tailored, thoughtful questions and for having me here. I enjoyed it very much!

Kristy: It was my pleasure, friend. Thank you for being so candid. I wish you much success with your upcoming release and have a wonderful 2019!